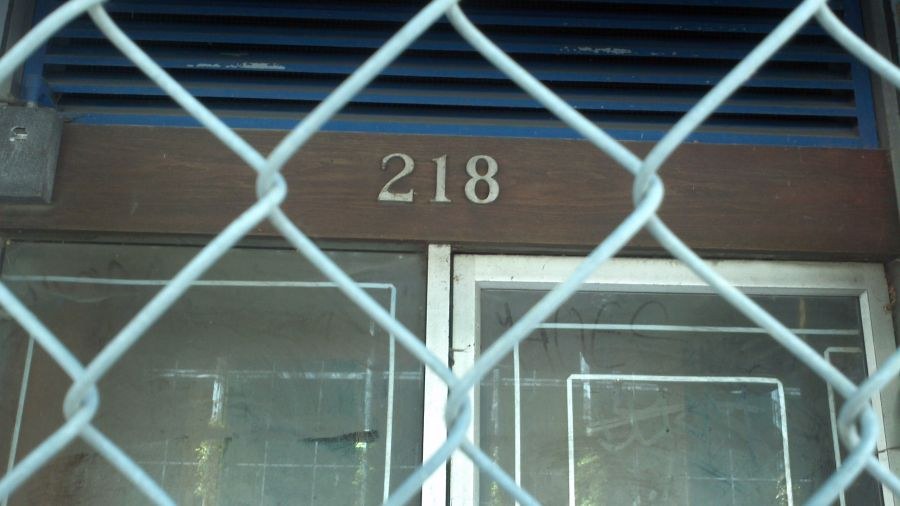 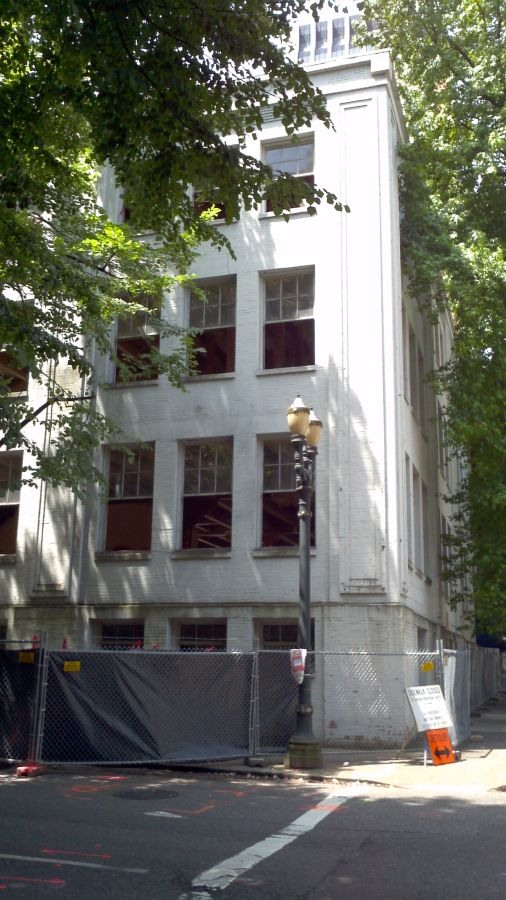 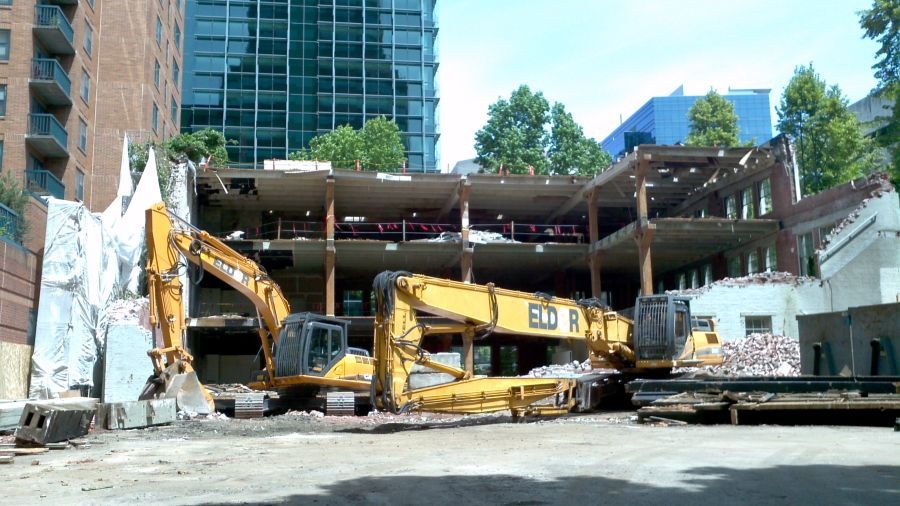 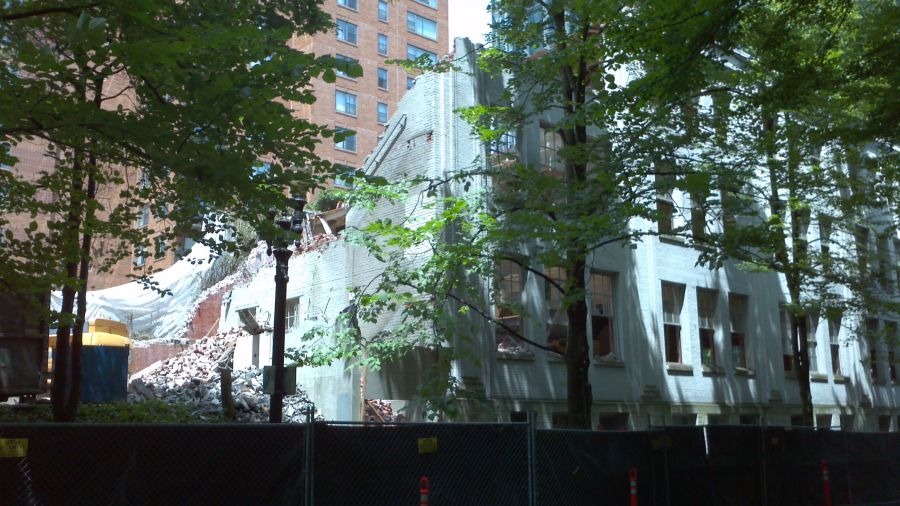 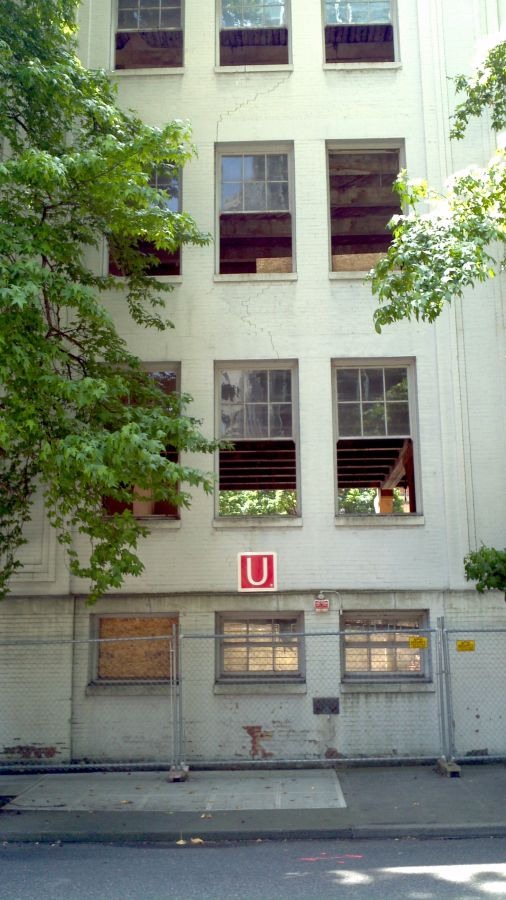 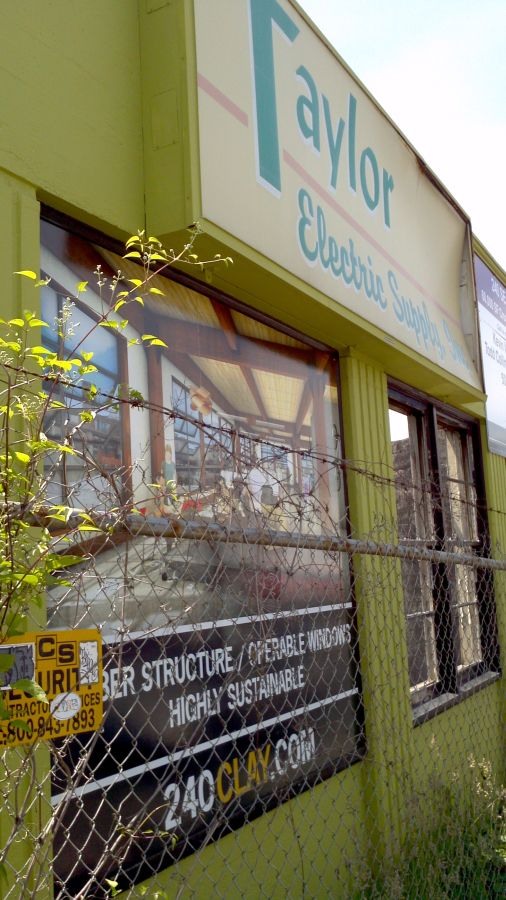 The ‘Gallag’ Galaga bootleg board I was planning on dropping into my project Midway cocktail cab shit the bed at some point during handling. I got it staged for installation, partially wired up, and then found I couldn’t get a useable video signal out of it. I could get a few frames of the attract screen when it wasn’t uncontrollably rolling, but even then everything was tinted red. I thought the G07 monitor chassis might be to blame, but swapping that out with a known good one didn’t elicit any change. Time for plan B. 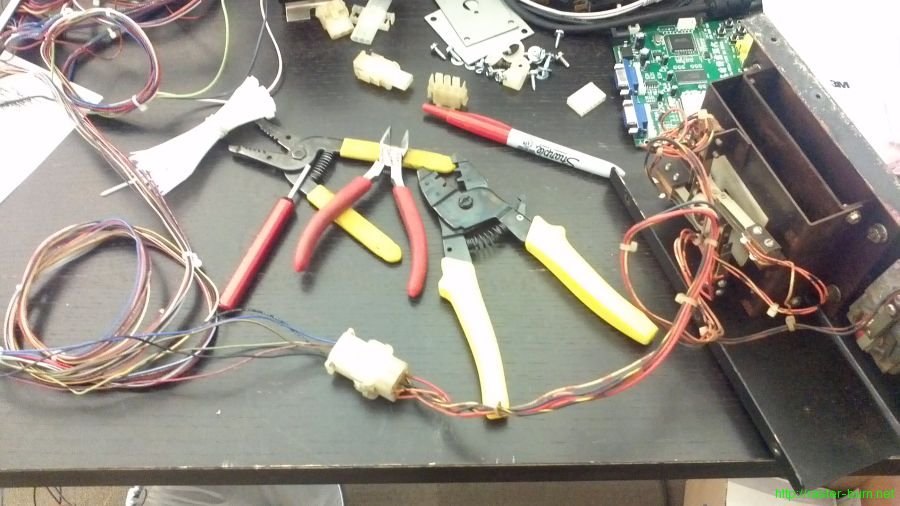 Earlier this month the Gorf control panels I bought came in the mail. They were cheap, match the original equipment for the cab, and are a two axis joystick with single button configuration which works for a ton of games. This past Friday I picked up a pair of 60 in 1 multi game boards locally for a pretty decent price. Finally, I had a generic JAMMA standard harness from a cut corner Dynamo cab I salvaged parts from several years back when the High Score arcade in the Dimond Center closed. 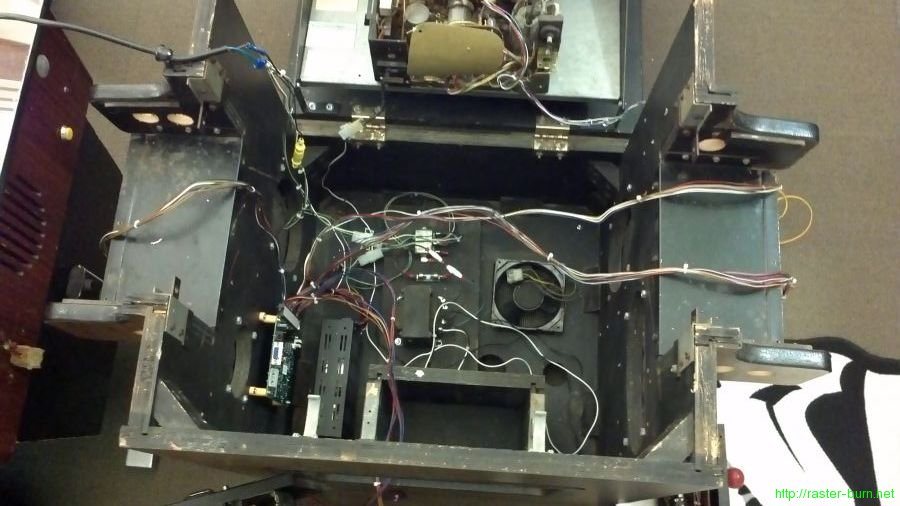 I started combining all of these bits and pieces, got stuff laid out on Friday and was able to get video from the multi board. Good sign… 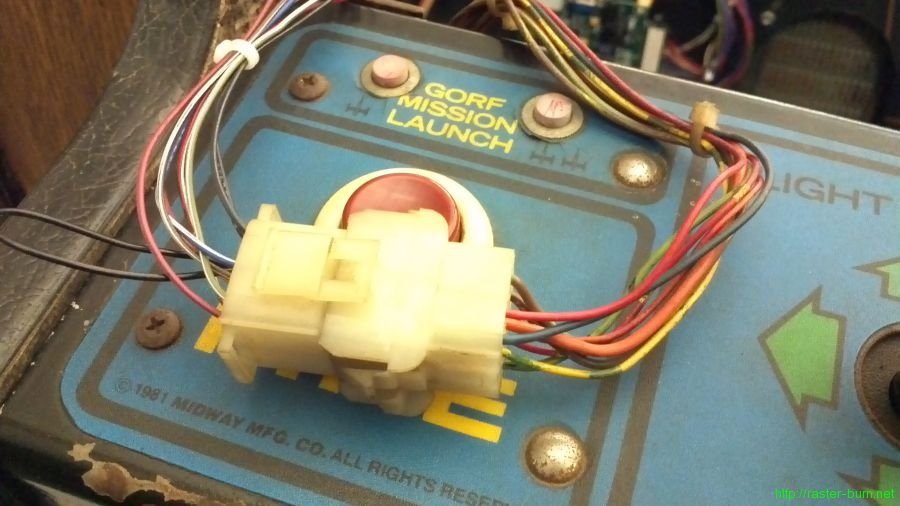 I used connectors salvaged off of the super hacked up Galaxian harness that came with the Gallag bootleg board to interface the JAMMA harness cleanly with the Gorf control panels. I picked up a ton of tools and pins to use with Molex connector bodies over the past few weeks. My end goals are making everything I build from here on out very modular, and cutting out butt splice and blade connectors as much as I can.

Ended up having to special order the .084″ MLX style connectors that are common in the golden age arcade games since they’re obsolete and weren’t carried by URS electronics. I was able to get the .062″ and .096″ standard and KK stuff from them though. I’m told I’m their #2 consumer of Molex products now… That’s a little scary. 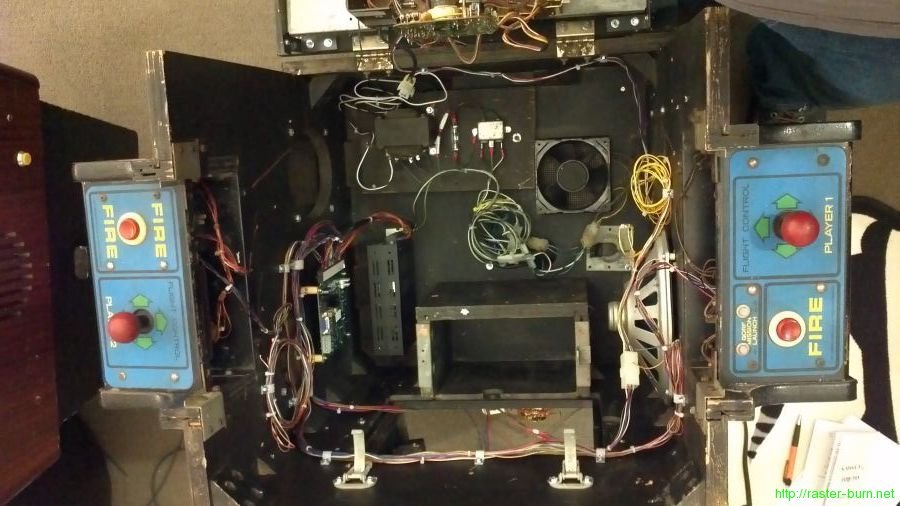 Getting things squared away. I was testing intermittently here to make sure I had my inputs wired up correctly, and noticed the colors were distorted on one side of the monitor, but only when the cabinet was closed. At first I though it was due to the speaker coil being close to the tube, or maybe the isolation transformer… Turns out though that if you drastically change the orientation of a monitor some funky stuff can happen with magnetic fields and you’ll get odd results. Fortunately, degaussing will fix it, and in this case the built in degaussing coil on the G07 was enough to solve the issue. 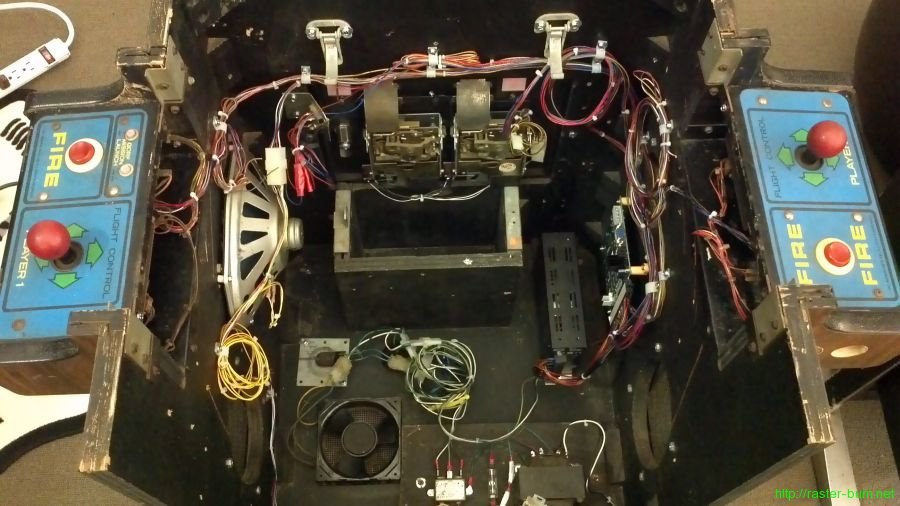 The finished product, more or less. I need to clean up the AC wiring a little bit still, there’s a lot of slack in there from the pigtails I built for the power switch and ventilation fan. 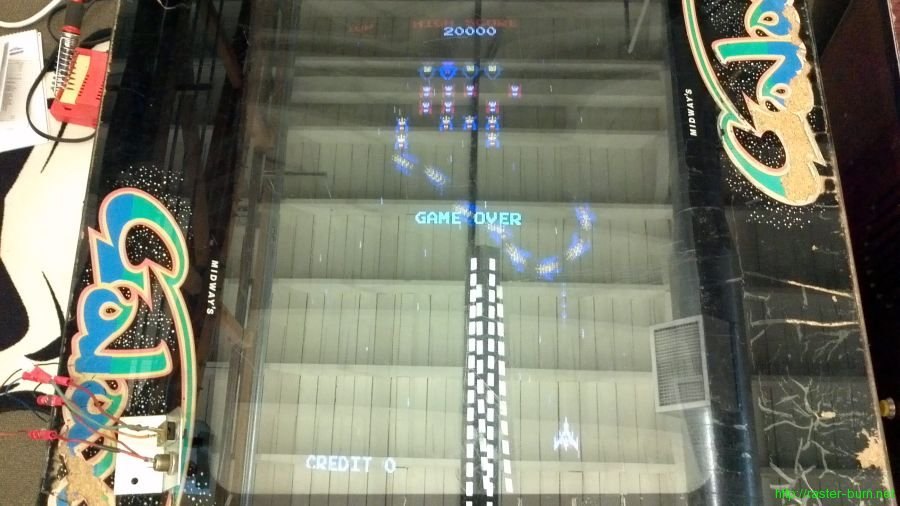 The cab is totally playable at this point, I’ve got it booting straight to Galaga. Might try to find either a Galaga or Gorf top glass, but that’s pretty low priority since this thing is a total Frankenstein regardless of any changes. The things I 100% need to do are get a set of the plexiglass filler pieces that go behind the control panels, and wire up lighting behind them, and a set of strike brackets for the latches that hold down the table top.

Might also try to shore up the far side of the table top from the hinge since it’s bowed a bit which allows a lot of stress to be placed on the glass on that edge. Happy with the results so far though and looking forward to getting some competition going on this one since I know Galaga strikes some nostalgic chords for a lot of people.

Found something I’ve been after for a lonnnnnnng time today… 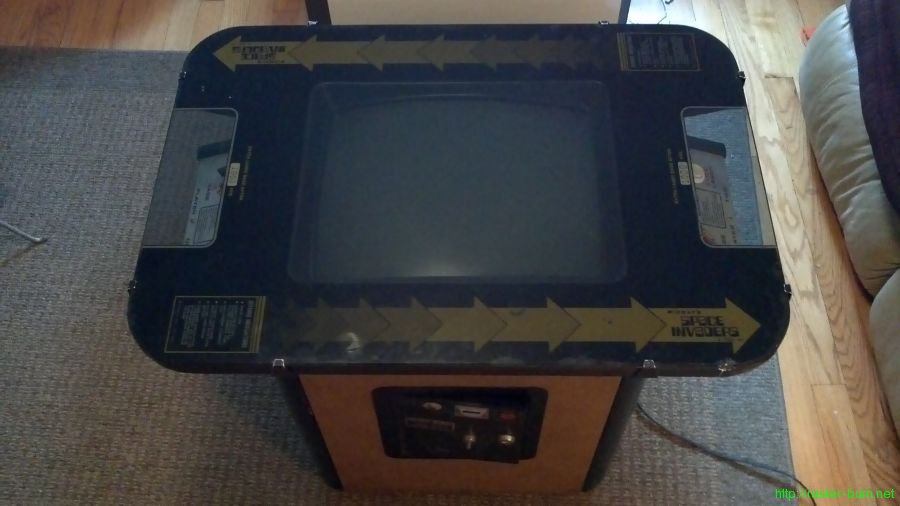 It was rather serendipitous and I’m really excited about it! My parents had one of these Space Invaders cocktail table machines in their living room when I was a little kid and I was always sad they got rid of it. It’s been something I’ve been hunting off and on even before I leapt back into the hobby for real. 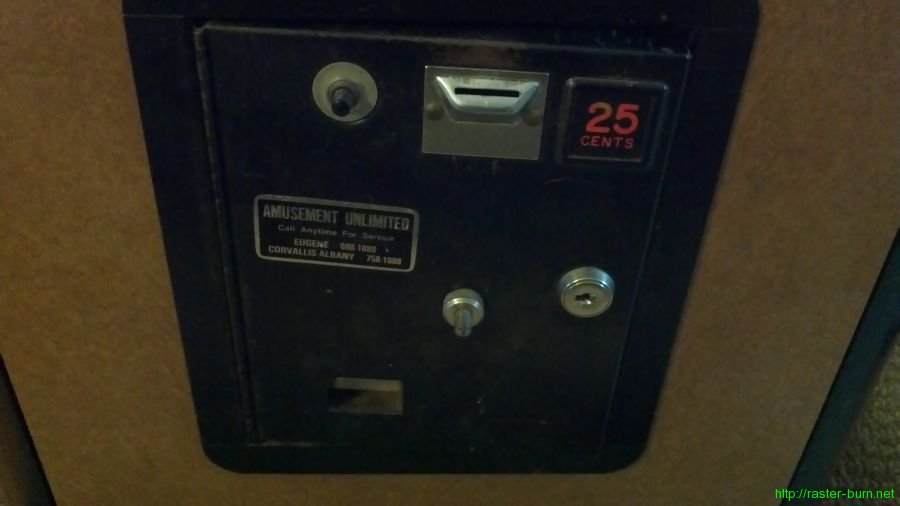 Seems likely that it’s been in the area since new, and probably not swapped between locations too much. The cabinet is immaculate and doesn’t have any water damage, smashed corners, or other signs of hard use. A tag on the coin door identifies it as having been operated at some point by the still existent company Amusement Unlimited out of Eugene. 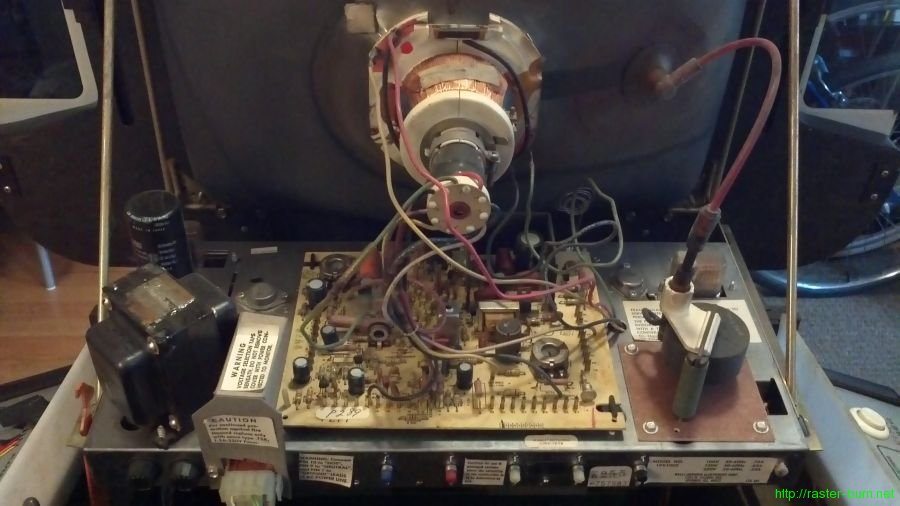 It’s my first black and white game, definitely a bit different than what I’m used to working on. Right now the monitor works perfectly, and it doesn’t look too daunting to keep that way. Not a lot going on compared to the chassis for a color raster monitor. 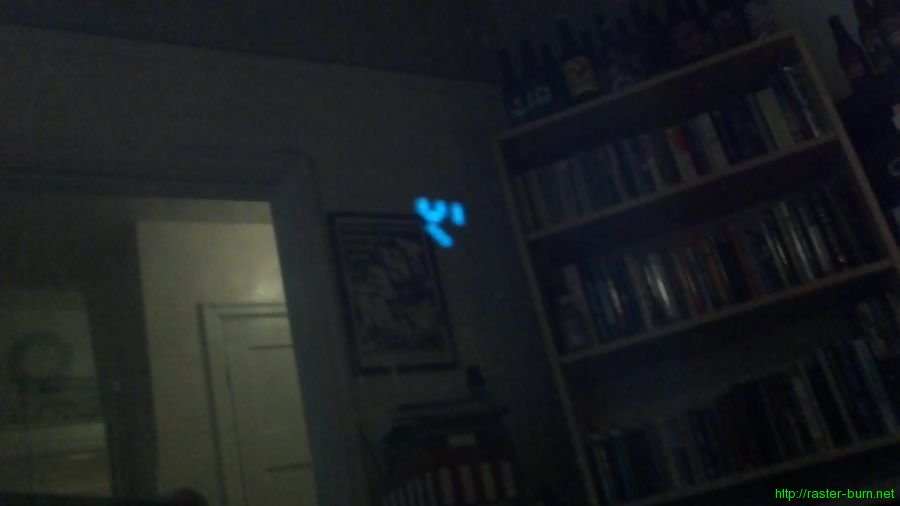 Sadly the board has issues. Right now all I get is this little cluster of partial characters. 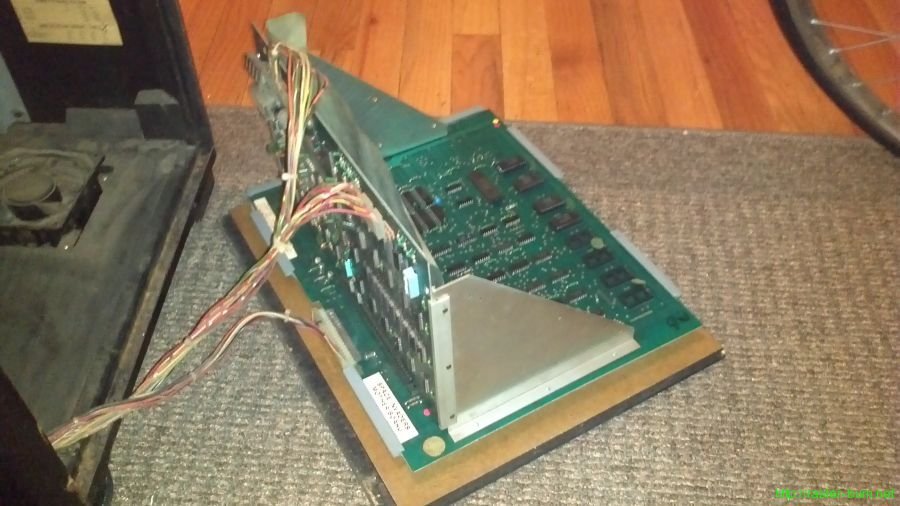 Again though, this thing looks dead simple compared to the newer stuff. Parts are nice and spread out on the PCBs too, so should be easy to work on. Based on my research so far I’m thinking there may be an issue with some of the RAM chips on the boards.